I tried to sign up via Google OAuth, but got the following error. Might this be an issue with the login mechanism? 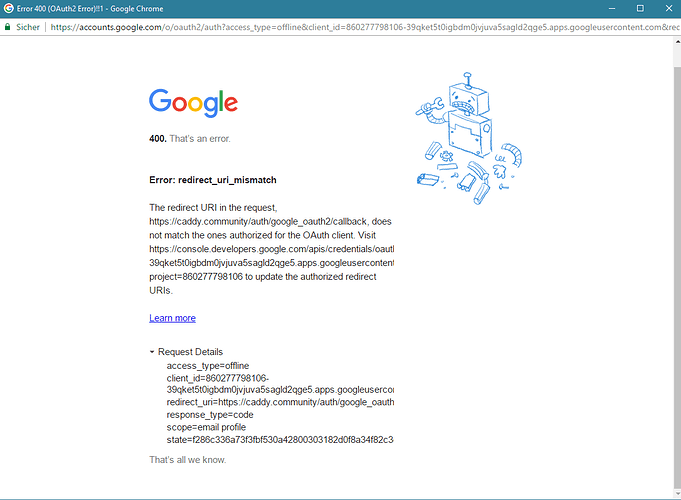 I think this may be a race condition with the new website. Try from https://caddy.community

Yeah, how’d you get the new domain name?

Gimme another day or two to get all the properties transferred over.

Ah nevermind, I just went ahead and did the switch. You’ll have to log in again, sorry about that. But let me know if anything doesn’t work!

By the way, I really like this forum software. Although the community forum is not served by Caddy

how’d you get the new domain name?

Although the community forum is not served by Caddy

I wrote up this example after fronting Discourse with Caddy: examples/discourse at master · caddyserver/examples · GitHub

I wrote up this example after fronting Discourse with Caddy:

Well, ok. I was confused by the server: nginx header in the responses.

Caddy proxies into a Docker container that the software ships in, and inside that container, nginx serves Discourse which is in Ruby I believe.

Caddy’s auto-HTTPS just makes it so much easier to do this way.

That is strange that the server header doesn’t show Caddy too. It used to…

Is Caddy deferring to the upstream {>server} instead of adding its own maybe?

I’m not sure, I haven’t had a chance to look into it. I don’t see anywhere in the code (at quick ‘Find’ glance) where the “Server” header would be removed. It sets it one of the first things in httpserver/server.go. I’ll have to investigate further (or someone else can if they want to).

I’m sure I remember a PR that changed a proxy from showing ‘caddy’ as the server to transparently showing the proxied server.

Can’t find it now though.

Hmm, maybe this one? https://github.com/mholt/caddy/pull/1112/files